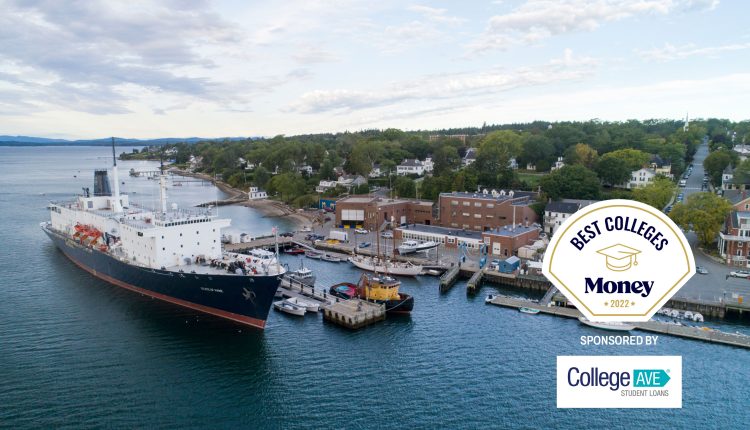 When you imagine a typical college experience, you might picture dorm life, late-night study sessions in the library, and getting involved in clubs. What probably doesn’t come to mind is regularly spending weeks at sea aboard military ships.

But for four of the schools on Money’s 2022 Best Colleges list — three of which cracked the top 20 — daily life is a blend of the typical and the nautical.

“Maritime industry is huge in the US,” says Capt. Mark Woolley, a retired US Navy captain and current chief of staff at SUNY Maritime College. “The merchant mariner includes anybody driving a small ferry all the way up to large cargo ships.”

Thus, the country needs places to train college students who want to specialize in the industry. Enter: state-run maritime academies.

The appeal of these schools is three-part: admissions requirements that make them accessible, relatively affordable prices and training for high-paying jobs. The last of the three is particularly important in explaining why these specialized schools score so high in Money’s analysis.

The academies offer the same training as the federal U. S. Merchant Marine Academy, minus the requirements of a congressional endorsement to get in or a post-graduate military service obligation. (Money does not include the five national service academies in our college rankings because they require the commitment of service in exchange for free tuition.) Although some graduates from state maritime academies do go on to join the Naval Reserves and other branches of the military, many opt to work in private shipping or in related fields entirely shore-side.

No matter where maritime students ultimately land, they tend to have impressive outcomes. When compared to what’s predicted of colleges that enroll a similar crop of students, the academies all see higher-than-expected graduation rates.

Such completion rates might be chalked up to a strict schedule and lifestyle. Most majors at maritime academies require students to complete the training necessary to receive a Merchant Mariner Credential. To comply with the required training, students in majors like marine engineering and transportation must participate in a Regiment of Cadets (known as the Regiment of Midshipmen at Maine Maritime, or the Corp of Cadets at Cal Maritime). The experience is not unsimilar to that of a military academy.

Some might balk at the idea of getting their higher education from a highly regimented maritime academy — especially if you’re not looking to obtain Merchant Marine licensing. But different colleges cater to different crowds, and on these campuses, many in the crowd appreciate the structured environment. Even students whose major doesn’t require it will often join the Regiment.

“When you ask them why they’re here, they’ll cite the discipline,” Woolley says. “They want to come to Maritime because they know it’s a very intense environment and that they’ll be held to a high standard.”

Incoming cadets can expect to be exceptionally prepared for their future careers. Without exception, every academy on the list requires that students complete multiple weeks of hands-on training each year, whether it be through internships, co-ops, or shipping out to sea.

“Students who come here are very interested in this sort of education,” says Natalie Herring, director of admissions at Cal Maritime. “They want to be engineers, they want to be scientists and they have an opportunity to get hands-on from day one.”

Cadets working toward their Marine Merchant Credential are required to sail out on multiple “sea terms” aboard real military training ships before they can graduate. Each school has their own training ship, leased to the program by the US government.

In addition to sea terms, students get practical experience year-round and opportunities to work directly with faculty and staff, thanks to the small sizes of these schools. The largest of the four, Massachusetts Maritime Academy, has an undergraduate student body of just 1,537.

Such an integrated experiential learning environment leads to one of the key reasons these schools ranked so high on this year’s Best Colleges list. Money’s data shows all four maritime academies boast alumni employment rates of over 98% within one year of graduation.

“We find that our students tend to be rather serious and really have their eyes on the prize for their future,” Herring says.

High salaries on the high seas

Courtesy of The Massachusetts Maritime Academy

Graduates also go on to have early career earnings that not only surpass similarly less-selective colleges, but also far exceed the typical figures for all 671 colleges on this year’s list. The median 10-year earnings for these four maritime academies combined is $87,952, about 60% higher than the overall median of $55,005.

“Most of our students are graduating off to civilian careers that are giving them salaries up to and beyond $100,000,” Herring says.

Even if students don’t go on to score six-figure salaries, the odds are very high that they’ll be better off financially than if they didn’t attend college. In this area, Massachusetts Maritime Academy scores highest out of the four with 91% of former students earning more than a high school graduate. But even the lowest performer of the group, Cal Maritime with 85%, still sits 12 percentage points above the Best Colleges’ median of 73%.

Likewise, students who take on student debt are making more progress in paying it off than students at similar schools, according to Money’s analysis. Roughly seven out of 10 former maritime students are making progress paying down their loans three years into repayment.

Those financial feats might come with a trade-off, though: Those who choose to earn their Merchant Marine Certificate and work on ships, whether for a private company or as a military service member, will of course have to spend quite a bit of time out at sea, away from their friends and family.

“You’re making great money yeah, but you’re out at sea every month, every 60 or even 90 days,” Woolley says. “So you have to want to be in the maritime industry and understand what sailing on a license is.”

These Are the 25 Best Colleges in America

No SAT, No Problem? How Test-Optional Policies Are Changing College Admissions

Highlights May 19: Major cryptos deep in the red