WhatsApp to finally let users react to messages with any emoji they want: Details 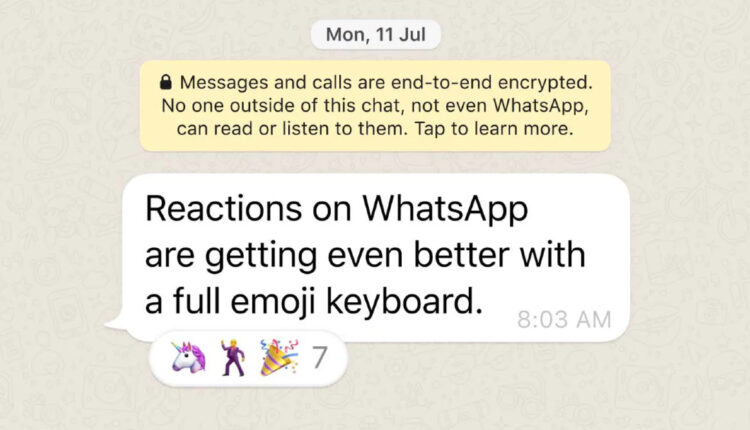 WhatsApp is finally expanding its emoji reactions feature to let you react to messages with any emoji you want. Previously, you could only do this with a limited number, six to be precise. This means that now you can react to your WhatsApp messages with any emoji available on your phone/keyboard without being bogged down by choosing from a pre-defined set. The feature will be available across both Android and iPhone, WhatsApp has confirmed.

WhatsApp had rolled out support for emoji reactions in May kicking things off with six emojis. It had confirmed, at that time, that support for “all emojis and skin-tones” was in the works, too, and will be rolled out soon. The feature was first teased in mid-April alongside a bunch of other features including Communities.

Reactions allow users to “quickly share their opinion without flooding chats with new messages,” the instant messaging platform notes and by removing the limit from the kind of emojis that you can pick from, it’s basically making the feature more useful. That said, WhatsApp is playing catchup with apps like Telegram, Slack, and iMessage, where emoji reactions have been available for some time. Even Instagram, which is also owned by Meta, has this feature.

How to use Emoji reactions on WhatsApp:

2. Press and hold on the message that you want to react to.

3. A pop-up will appear from which you can choose the emoji you want to react with.

4. Select one to use as a reaction to the selected message.

7. The emoji reaction will appear below the text selected.

Starting to roll out now to Android and iOS pic.twitter.com/Opk7x0n0VP