The 10 Best Colleges for STEM Majors 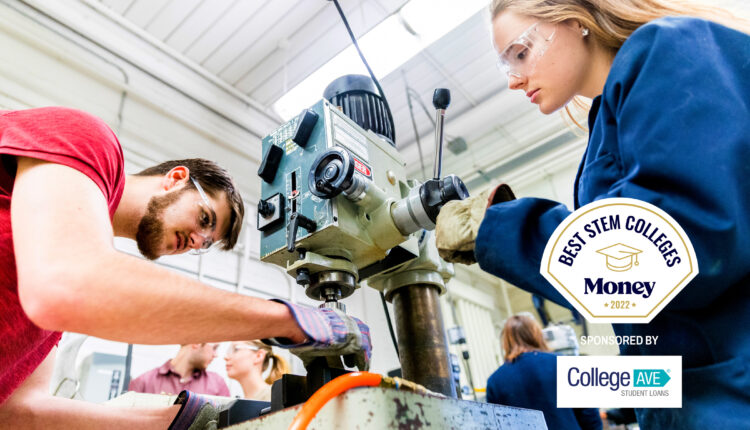 College graduates with degrees in STEM fields are some of the most sought-after candidates on the job market.

That’s little surprise, as the science, technology, engineering and math coursework help prepare students for many of the country’s most in-demand jobs, including nurses, statisticians and computer security specialists.

Still, if you’re considering majoring in a STEM field solely because of the money, keep this in mind: There’s a lot of variation in typical pay depending on where you fall under the large umbrella of STEM. Degrees in subjects like computer engineering and data science often lead to six-figure salaries, while those in biology and life sciences tend to be on the lower end of the spectrum, particularly when you’re fresh out of school.

To help prospective students sort through science and tech schools, we’ve narrowed down our latest college rankings — which focus on affordability and salary outcomes — to highlight campuses with strong STEM programs. (We looked at colleges that made both our main rankings and schools on our separate list of selective colleges). Colleges were scored on the number and share of recent alumni who earned a degree in the STEM fields, as well as the median salaries of recent graduates with STEM degrees.

Like our overall rankings, the list of top STEM colleges include schools big and small, public and private, elite and more accessible to an average student. Read on to see the top 10, then check out our full ranking of the 50 best colleges for STEM students here.

As one of the world’s most-respected STEM schools, MIT offers students access to some of the world’s top scientific minds, with 11 Nobel laureates currently on the School of Science’s faculty. Engineering degrees — particularly mechanical engineering — are the most common, but math and computer science are popular majors as well. Even students who choose to major in a non-STEM program should plan to spend some time in the lab: All undergraduates are required to take two semesters of calculus, two semesters of physics and one semester each of chemistry and biology.

Courtesy of The Georgia Institute of Technology

Georgia Tech’s engineering and computing colleges are among the largest in the country. In computing, students follow what’s called the “Threads” curriculum, a customizable degree that weaves in foundational computer science courses alongside real-world pathways they choose. Learning experiences outside the classroom are a priority in both colleges: A third of engineering undergrads, for example, take advantage of research opportunities during their time at Georgia Tech, and 56% study abroad. The school’s Atlanta location also gives students access to internships and work opportunities with major companies.

With just under 1,000 undergraduates, Caltech students can expect a lot of close interaction with some of the college’s roughly 300 professors. With the challenging coursework comes great research opportunities: Internships at NASA’s Jet Propulsion Laboratory, located near Caltech’s Pasadena campus, are a prime example. There are also summer undergraduate research fellowships, which the college calls one of the “crown jewels” of a Caltech degree. Overall, 90% of undergraduates participate in research.

Although Harved Mudd is classified as a liberal arts college, all of the college’s 10 majors fall in the STEM fields. (Students also have the option to create their own majors.) The liberal arts background is an integral part of the Harvey Mudd experience, though. All students take a healthy dose of social sciences and humanities courses as part of their general education because, as the college says, “technology divorced from humanity is worse than no technology at all.”

Whatever your flavor of STEM, Stanford has connections for you. Undergrads in the science and health fields, for example, can intern at several university-affiliated research institutes, including the Canary Center, which is focused on early cancer detection. Students interested in the tech industry, whether that’s working for a major corporation or founding a startup, have Silicon Valley in their backyard. And regardless of what you study, you’ll brush shoulders with a stunning array of innovative and important thinkers: The faculty at Stanford features 20 Nobel laureates, more than 20 MacArthur fellows and three Pulitzer Prize winners.

As a large public university, Cal offers more than 100 degrees ranging in everything from anthropology to urban studies. But about half of recent graduates have earned a degree in a STEM field. Programs like computer sciences and electrical engineering have long been popular majors at Cal, while data science — now the third-most popular bachelor’s degree — has rapidly grown in recent years. The largest employers of recent Cal grads in those three fields is a who’s who of the tech world: Amazon, Apple, Google and Microsoft.

Texas A & M is one of the country’s biggest universities, and with size comes scale: There are more than 50 STEM-related majors for students to choose from, plus hundreds of student organizations, including 90 engineering groups and 60-plus agriculture and life sciences groups. They bring together students interested in everything from bugs to rockets (officially: entomology and aerospace engineering).

Courtesy of The University of Illinois

The University of Illinois at Urbana-Champaign is steadily building its reputation as a stellar research institution. About 60% of recent graduates from the University of Illinois earned a degree in a science, technology, engineering or math field, and the university’s faculty experts have recently made headlines for studying everything from coral to irritable bowel syndrome. UIUC also has a years-long project, called I STEM Education Initiative, aimed at promoting and improving STEM education. Two of its major goals are increasing graduation rates and achieving more diversity within STEM fields.

The University of Michigan spends more on research than any other public university, a distinction it has claimed for several years running. To find a small STEM niche amid the large campus, students can join residential communities like the Women in Science and Engineering program or the Health Sciences Scholars program. Interested in computer science? You can study in one of the country’s oldest computing programs while competing on one of 14 robotics design teams. And students across campus can enroll in popular STEM courses offered through the university’s College of Literature, Science and Art, including “Alien Skies: A Tour Through the Universe,” “Biostatistics” and “Intro to Cryptology.”

4 Tips for Finding the Best College for You