Recession vs. Depression: What’s the Difference? 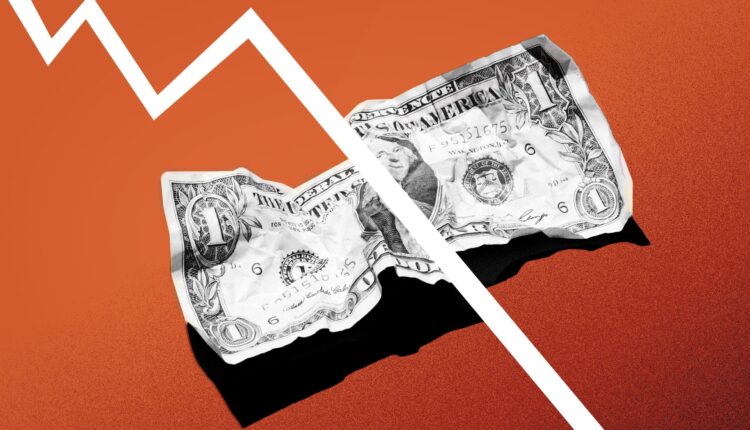 Remember those “roaring 2020s” parties everyone threw right before the pandemic began? They might have been more prophetic than intended.

The economy has been on a rollercoaster ride for the past few years, starting strong in 2020 but dropping off precipitously due to the COVID-19 crisis before bouncing back so drastically that it overheated. Now, with the war in Ukraine, record-high inflation and continued supply chain issues, the economy is struggling again — and folks are increasingly debating whether the U.S. has entered a recession.

Some (including former President Donald Trump) are even going a step further, wondering aloud if the country will actually enter a depression, the likes of which we haven’t seen since the early 20th century, when the celebrations of the ’20s gave way to a stock market crash that left millions jobless.

But there’s a big difference between a recession and a depression. Here’s everything you need to know about the two economic conditions.

What is a recession?

Broadly speaking, a recession is a period of prolonged economic downturn. One oft-cited way of determining whether the U.S. economy is in a recession is by looking at gross domestic product, or GDP. If the GDP has declined for two consecutive quarters, the wisdom goes, we’re in a recession.

However, there’s an actual group of people tasked with formally declaring recessions in the U.S., and it uses a slightly different, less specific definition of a recession. The National Bureau of Economic Research’s business dating cycle committee says only that a recession is “a significant decline in economic activity that is spread across the economy and that lasts more than a few months.”

What is a depression?

According to the NBER website, the word “depression” is typically linked with “a particularly severe period of economic weakness.” A depression usually includes the stretch when the economy is suffering as well as the time it spends returning to normal.

What is the difference between a recession and a depression?

Basically: A depression is longer, and worse, than a recession. Because of this, recessions are much more common than depressions.

When was the last recession?

Officially, the most recent recession occurred between February 2020 and April 2020. Largely triggered by the COVID-19 pandemic, the 2020 recession saw GDP shrink by about 5% in the first quarter and 31.4% in the second quarter. Amid lockdowns and layoffs, unemployment reached 14.7% in April 2020.

Before the pandemic hit, the U.S. had experienced a record-setting period of economic expansion: 128 months. That growth was preceded by the Great Recession, which took place from December 2007 to June 2009.

The U.S. may be in a recession as you’re reading this — the NBER committee responsible for declaring recessions frequently makes that call in retrospect. In the meantime, a variety of prominent figures have been casting their informal votes for yes-it’s-a-recession (ARK Invest CEO Cathie Wood) and no-it’s-not (President Joe Biden).

What happens in a recession?

When the economy slows down, businesses look for places to cut back, and so recessions are typically accompanied by an uptick in unemployment. It might be harder for you to get or keep a job, negotiate a raise or start a small business in a recession. As corporate earnings slide, stock prices do, too.

Because Americans have — or at least start worrying about having — less money in recessions, they often curb their spending. They avoid splurging on expensive vacations and fancy dinners, instead saving their income for necessities like bills.

What to do in a recession

To prepare for a recession, you may want to boost your emergency fund. (The rule of thumb is to sock away three to six months’ worth of necessary expenses, but you may want to increase that to eight to 12 months for a recession.) Pay off debt, if you can, so you don’t have to deal with those obligations if you lose your job. Finally, review your budget — there may be easy places to cut back, like by canceling streaming services or unused subscriptions.

For folks currently in a recession, take care of yourself. Economic downturns are temporary, even though they don’t always feel that way. Stay the course with your long-term investment strategy — reacting emotionally is never a good idea — and remember that the markets rebound from even the worst slumps. Deep breaths.

How to Buy I Bonds