People Are Venting About Inflation in Yelp Reviews Now 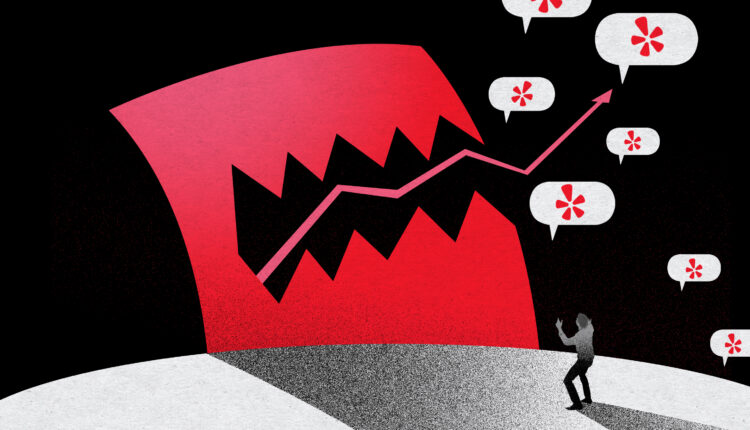 Want to know just how much Americans are feeling the sting of inflation? Check the reviews on Yelp.

A report released Wednesday by the crowd-sourced reviews service shows users are referencing inflated prices in their reviews of businesses more than ever before. Between April and June 2022, mentions of inflation in Yelp reviews shot up 28% compared to the same period in 2021 and 33% from those months in 2020.

“Shrinkflation” occurs when businesses shrink the size of their products but charge the same (or maybe even a slightly higher) price. A company might do this to recoup some of the higher operation costs it faces due to inflation without noticeably jacking up its prices.

But Yelp’s data suggests Americans are catching on — and calling businesses out for it. Casual restaurants, which tend to have lower prices to begin with, are being flooded with complaints about shrinkflation.

Case in point: “Shrinkflation is real at SS [Shake Shack],” New Yorker Kieun L. wrote in a one-star Yelp review of the fast-casual burger chain. “I can no longer justify paying $10+ for a burger that pales in quality and size.” On the other side of the country, a Yelp user highlighted smaller takeout boxes at the Chinese food chain Panda Express. “Shrinkflation at work,” wrote Tim B. of California. “I would have rather seen a price increase.”

In June, consumer prices rose 9.1% year over year, according to the latest numbers from the U.S. Labor Department. Overall, food prices jumped 10.4%, while prices for “food away from home” — which roughly translates to the cost of dining out — rose 7.7% over the same period.

While the nation is experiencing inflation levels unseen since the 1980s, those price increases aren’t felt uniformly across the country.

Yelp’s data reflects this: For example, reviewers in South Dakota mentioned inflation more than any other state by a landslide, logging a 127% increase in inflation-related language between April and June 2022 compared to the previous year. (On the other end of the spectrum, Yelp says reviews from North Dakota saw a 27% drop in mentions of inflation.)

Here’s a quick look of the top five states where Yelpers are feeling inflation — along with the types of businesses that are fueling the trend.

Companies — especially restaurants — changing up their offerings to cope with inflation isn’t a new phenomenon. In April 1979, when the inflation rate was north of 10%, the New York Times detailed how Big Mac prices were jumping at McDonald’s and, at sit-down restaurants, menus were shrinking, with fancy appetizers being replaced by salads.

Patrons weren’t happy then, either. They just didn’t have Yelp to voice their frustration.

You’re Probably Going to Get a Big Raise in 2023

An Opaque Web of Credit Reports Is Tracking Everything You Do

Analysts Suspect the Fed Will Bump Federal Funds Rate by 75 bps Next Week, Others Predict the ‘Biggest Hike in Decades’