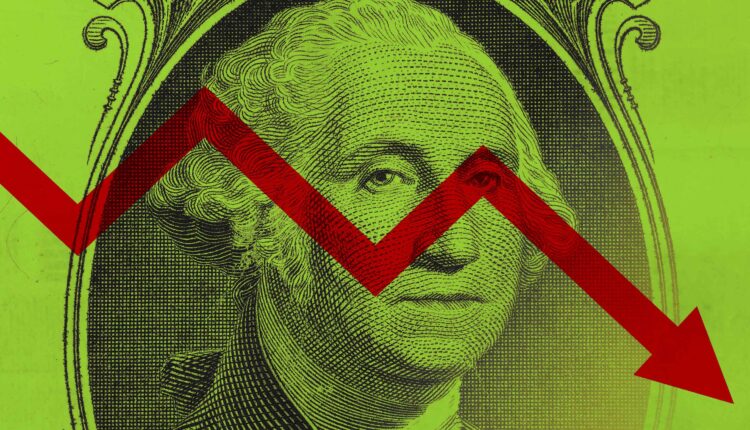 Are we in a recession or not? It depends who you ask.

By one measure, the economy is shrinking. Gross domestic product — a statistic that experts use to measure economic output in the U.S. — fell at a rate of 0.9% last quarter, according to government data released last month. That follows a contraction of 1.6% in the first fiscal quarter.

Those two quarters of negative growth are enough to satisfy what many see as the technical definition of a recession, though the business cycle dating committee at the National Bureau of Economic Research uses a much more expansive definition that accounts for personal income, consumer spending and saving, industrial production and more. The NBER committee is tasked with formally pinpointing when the country is and isn’t in a recession, but it has not yet taken that step.

(However, it often does this retroactively, so it’s possible we’re in a recession now.)

By other measures, the economy is doing well. The U.S. added more than 500,000 jobs in July, for instance, which indicates a strong labor market, and unemployment is very low by historical standards.

But amid rising prices — especially for essentials like groceries, gas and housing — and slower spending, it’s hard for many everyday consumers to believe the economy is in a good place. This confusing moment has economists, politicians and business leaders arguing about whether we’re in a recession or not… and whether that even matters.

Here’s where some prominent figures fall.

No, we’re not in a recession

“We’re not going to be in a recession, in my view,” he said last week, adding that the unemployment rate remains historically low at 3.6% and that business investment is still happening. “My hope is we go from this rapid growth to a steady growth,” he added. “God willing, I don’t think we’re going to see a recession.”

“I do not think the U.S. is currently in a recession,” he told reporters last month. “And the reason is there’s just too many areas of the economy that are performing too well,” he added. He then pointed specifically to jobs: “This is a very strong labor market … 2.7 million people hired in the first half of the year? It doesn’t make sense that the economy would be in recession with this kind of thing happening.”

Beyond GDP, “indicators of economic activity — payroll employment, real personal income net of government transfer payments, and industrial production — grew in the first half of this year,” he said in a research note. Mericle added that while bringing down inflation without damaging the economy will be difficult, “I don’t think we’ve fallen into a recession yet.”

Yes, we are in a recession

“We are in a recession,” she told CNBC at the end of July, citing excess inventory at major retailers like Target and Walmart. Wood added that employment data, which has been the focus of the Federal Reserve and the Biden administration, is a lagging indicator.

A majority of American adults

Nearly two-thirds of voters believe the nation is in a recession, a recent Morning Consult survey found. Nearly 8 in 10 Republicans polled said they believe a recession is happening, compared with just over 50% of Democratic respondents.

“We’re in a recession, and this is going to make it worse,” Sen. Lindsey Graham, R-S.C., said during a news conference last week, referring to the Inflation Reduction Act spearheaded by the Democrats. “I’m pleased we have strong job growth,” Sen. Bill Cassidy, R-La., added, “but we are in a recession,” citing the rapidly cooling housing market as evidence.

Other experts say that while we’re probably not in a recession at the moment, there’s a good chance we’re headed for one in the coming months.

“Are we in a recession? We don’t think so yet,” S&P Global Market Intelligence Chief Economist Joel Prakken recently told the New York Times. “Are we going to be in one? It’s a high risk.”

Harvard University economists Alex Domash and Larry Summers, the latter of whom served as Treasury Secretary under President Bill Clinton and an economic advisor to President Barack Obama, argue that the combination of high inflation and low unemployment points to the “substantial likelihood” of a recession within the next two years.

Bottom line? The economy is in a weird place. It’s contracting by some measures and expanding by others, leading experts to be divided about their predictions. What’s for sure is that recessions — and expansions, for that matter — are a normal part of the economic cycle, and there are ways to prepare for a downturn.

That’s true whether it comes in a few weeks, a few months or a few years.

The Economy Is Shrinking. Are We Officially in a Recession?

Does This Bear Market Mean a Recession Is Coming?

Is a Recession Coming Soon? This Bond Market Indicator Is Flashing Red