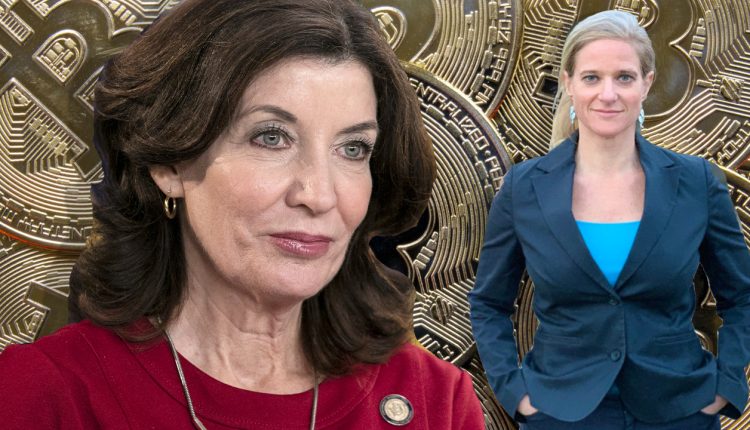 The state of New York passed a bill that puts a moratorium on specific types of cryptocurrency mining operations that leverage carbon-based energy sources. The policy will place a two-year ban on proof-of-work (PoW) mining if the assembly bill is approved by New York governor Kathy Hochul.

New York PoW Mining Moratorium Legislation to Be Delivered to Governor Kathy Hochul’s Desk, Crypto Advocates Say the Bill Is a ‘Significant Setback for the State’

New York-based lawmakers have submitted a bill that aims to ban PoW mining operations that leverage carbon-based energy sources. Assembly Bill A7389C was authored and sponsored by New York State Assemblywoman Anna Kelles. The Democratic Party politician from Assembly district 125 said in an interview she needed to do something because she felt “the environment kind of crumbling around” her. Kelles further remarked that it stressed her so much while laying in bed and she was “not able to fall asleep.”

In recent years, New York has implemented aggressive climate goals and the state has plans to cut carbon emissions by 85% by the year 2050. Assembly Bill A7389C does not discuss how bitcoin mining can improve renewable energy demand or how it can reduce emissions. An ESG study published in May shows that bitcoin mining has the potential to eliminate 0.15% of global warming by 2045. Moreover, Bitcoin’s network emissions only account for 0.08% of the world’s CO2. Further, Assembly Bill A7389C does not discuss the carbon and military violence associated with the U.S. dollar’s proof-of-work algorithm.

Assembly Bill A7389C has been passed by the New York Assembly and by the Senate, and the bill will soon be delivered to the Democratic New York governor Kathy Hochul. If Hochul signs the bill, the moratorium on specific types of cryptocurrency mining operations will begin. A report published by CNBC’s MacKenzie Sigalos explains members of the crypto industry believe the policy could have ripple effects across the country. Galaxy Digital’s Amanda Fabiano said:

New York is setting a bad precedent that other states could follow.

Greenidge Generation Holdings Inc. (NASDAQ: GREE) sent a statement to Bitcoin.com News and noted that the bill will not interrupt the operations the company runs in New York. “The bill language plainly states, and the bill’s original sponsor has confirmed, that the legislation will not apply to Greenidge’s operations,” Greenidge said on Friday. “Should the legislation be signed into law, our fully permitted power generation and cryptocurrency data center in Dresden, NY will continue to operate without interruption.”

Speaking with CNBC’s Sigalos, the founder and president of the Chamber of Digital Commerce, Perianne Boring told the reporter that the moratorium is a setback. “This is a significant setback for the state and will stifle its future as a leader in technology and global financial services,” Boring detailed. More importantly, this decision will eliminate critical union jobs and further disenfranchise financial access to the many underbanked populations living in the Empire State,” the Chamber of Digital Commerce president added.

What do you think about New York’s moratorium policy on specific types of cryptocurrency mining operations? Do you think governor Kathy Hochul will sign the bill? Let us know what you think about this subject in the comments section below.