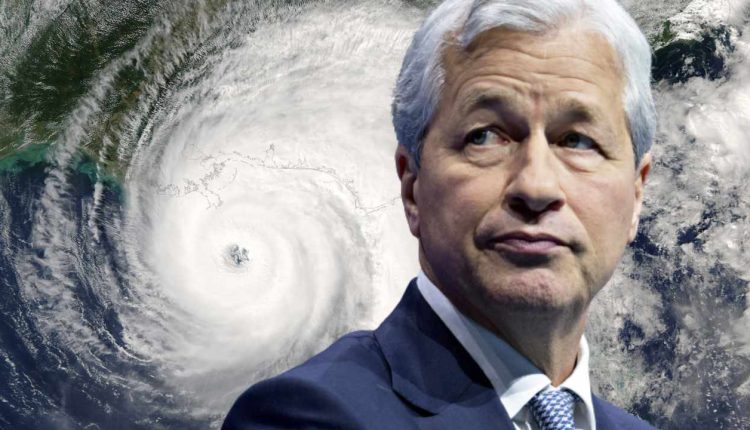 JPMorgan CEO Jamie Dimon has warned that an economic “hurricane” is coming. “You better brace yourself,” he advised. “We just don’t know if it’s a minor one or Superstorm Sandy.”

Jamie Dimon on the U.S. Economy and QT

The CEO of JPMorgan & Chase, Jamie Dimon, warned about an incoming economic hurricane Wednesday at a financial conference sponsored by Alliancebernstein Holdings.

“It’s a hurricane,” Dimon exclaimed. While noting that “Right now it’s kind of sunny, things are doing fine, everyone thinks the Fed can handle it,” the JPMorgan executive stressed:

That hurricane is right out there down the road coming our way. We just don’t know if it’s a minor one or Superstorm Sandy … You better brace yourself.

Dimon is concerned about several key issues. Firstly, the Federal Reserve is expected to reverse its emergency bond-buying programs and shrink its balance sheet, and the quantitative tightening (QT) is scheduled to begin this month.

We’ve never had QT like this, so you’re looking at something you could be writing history books on for 50 years.

He explained that central banks “don’t have a choice because there’s too much liquidity in the system … They have to remove some of the liquidity to stop the speculation, reduce home prices and stuff like that.”

Dimon is also worried about the Russia-Ukraine war and its impact on commodities, including food and fuel. He warned that oil could potentially hit $150 to $175 a barrel.

Warning that “wars go bad” and there are “unintended consequences,” the executive stressed:

We’re not taking the proper actions to protect Europe from what’s going to happen to oil in the short run.

Last month, Dimon told Bloomberg that the Federal Reserve should have moved sooner to raise interest rates. He admitted that he is worried about the Fed starting a recession.

Blackrock, the world’s largest asset manager with nearly $10 trillion under management, recently explained: “If they [the Fed] hike interest rates too much, they risk triggering a recession. If they tighten not enough, the risk becomes runaway inflation.”

What do you think about JPMorgan CEO Jamie Dimon’s warning? Let us know in the comments section below.

IT Hiring and pay boom fuel demand for homes in Bengaluru