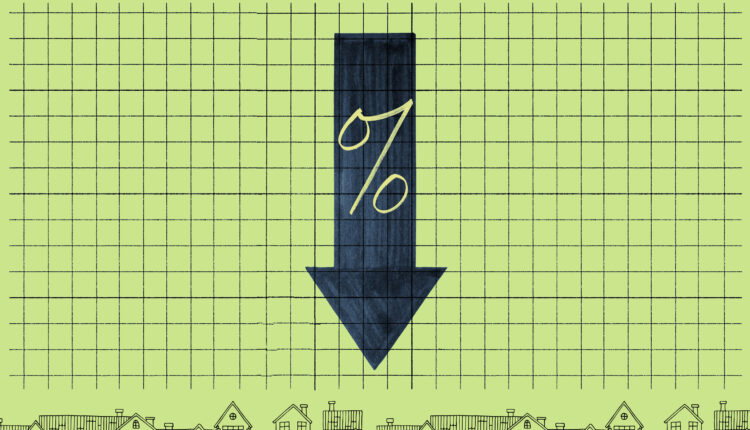 Mortgage rates saw another big decline this week as the market continues to seesaw between fears of an inevitable recession and positive economic news that could allay those fears.

“Mortgage rates remained volatile due to the tug of war between inflationary pressures and a clear slowdown in economic growth,” said Sam Khater, chief economist at Freddie Mac.

The average interest rate on a 30-year fixed-rate mortgage moved down 0.31 percentage points to 4.99%, according to Freddie Mac’s benchmark survey.

Interest rates on home loans saw a rapid rate of increase in the first half of the year, with the 30-year rate reaching a high of 5.81%. Since late June, however, rates have retreated — and now seem to be in a bit of a holding pattern closer to the low 5% range.

Where will mortgage rates go from here?

Despite today’s drop, mortgage rates are likely to remain above 5% for the remainder of the year, depending on the U.S. economy and inflation rates.

This week’s decrease in rates comes on the heels of mixed economic news over the past few days.

On one hand, high inflation has caused the Federal Reserve to increase the federal funds rate, the rate banks charge each other for overnight loans, by a total of 2.25%-2.5% since the start of the year. The Fed has also signaled more increases are likely through the end of the year.

Although the federal funds rate doesn’t directly impact the interest charged on fixed-rate loans, it does impact interest rates on Treasury bonds which do influence mortgage rates. Both inflation and a higher federal funds rate help put upward pressure on rates.

Signs of a slowing economy, however, have raised fears of an impending recession. If that happens, some industry experts predict, the Fed may have to scale back its plans for rate increases, which could keep mortgage rates from rising significantly higher and may even lead to lower rates by the end of the year.

Homes sales have slowed, and sales prices are starting to lose steam as well. Gross Domestic Product (GDP), a measure of the total value of goods and services produced annually in the U.S., has also fallen over the course of 2022.

“Without a clear direction, markets are confining mortgage rates to move within a tighter range, as the sharp upward push has moderated,” said George Ratiu, manager of economic research at Realtor.com, in a statement.

Best Mortgage Lenders of 2022
Mortgage Calculator by Money
How to Get the Lowest Mortgage Rate: A Step-by-Step Guide