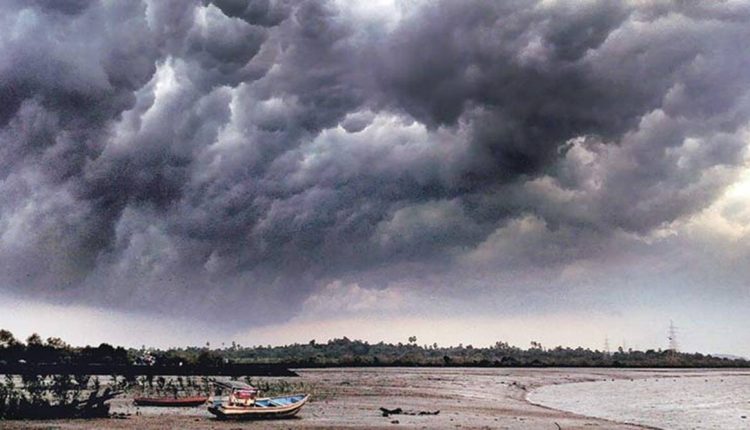 The India Meteorological Department on Sunday confirmed the year’s first storm in the North Indian Ocean region — Cyclone Asani — was developing over southeast Bay of Bengal and warned that it would intensify by two stages by Monday. The cyclone is likely to strengthen into a very severe cyclonic storm, with wind speeds reaching 118 to 220 km/hour, and remain over east-central Bay of Bengal.

According to the projected movement track released by the Met department, the storm will reach the Andhra Pradesh-Odisha coast by Tuesday. However, it is unlikely to make landfall and could skirt the coastal districts during the next two days. If realised, Cyclone Asani could follow a similar path to Cyclone Jawad, which developed in the Bay of Bengal and swerved past south Odisha in December.

According to the weather agency’s observations at 5.30 AM, during the past six hours the cyclone had moved west-northwestwards at 16 km/hour. The cyclone’s latest location was about 380 km west of Port Blair, 450 km west-northwest of Car Nicobar, 970 km southeast of Visakhapatnam, and 1,030 km south-southeast of Puri.

Deep Depression over intensified into a cyclonic storm ‘Asani’ about380 km west of Port Blair (Andaman Islands).To move northwestwards and intensify further into a Severe Cyclonic Storm over east central Bay of Bengal during next 24 hours pic.twitter.com/3AkJAtHIxw

The Met department has predicted heavy-to-very rainfall in the Andaman and Nicobar Islands on Sunday. Odisha has also been put on a high alert ahead of a heavy rainfall forecast on Tuesday and Wednesday. Rainfall is expected from Tuesday evening with a ‘yellow alert’ being issued in Puri, Gajpati, and Ganjam districts. Heavy rainfall warning has been issued for Puri, Jagatsinghpur, Khurda, Ganjam, and Cuttack districts on Wednesday.

Under the influence of the system, thunderstorms, lightning and light rain are expected over Jharkhand, Bihar, West Bengal and Sikkim till Thursday.

Starting Sunday, winds with packing speeds starting 45 km/hour and reaching a maximum of 90 km/hour, are expected on Tuesday and Wednesday over central Bay of Bengal.

DD over Southwest BOB near lat 10.8°N and long 90.1°E, about 300 km WSW of Port Blair (Andaman Islands).To move northwestwards and intensify into a Cyclonic Storm over SE Bay of Bengal in the morning of 8th May and into a severe cyclonic storm over EC BOB by 08th May evening. pic.twitter.com/YEEH86qY9s

The Met department has already issued a warning to the fishing community against venturing into the Bay of Bengal and the Andaman Sea during the next three days in view of the approaching cyclone and rough sea conditions.