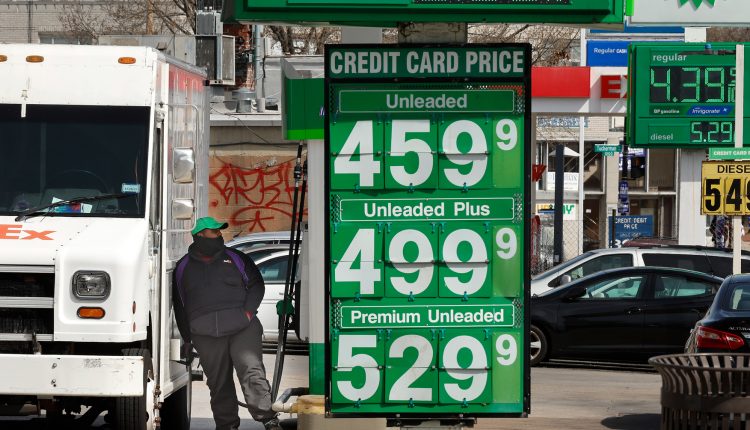 Drivers got a minor reprieve after gas prices fell from their all-time high ($4.33) earlier this year. But now that spring is here gas is getting more expensive yet again.

Gas prices rose at the fastest pace ever recorded in March, and after leveling off for a bit they began climbing again over the past few weeks. As of Monday, the average gallon of regular gas cost $4.19, which is 7 cents more expensive than last week and $1.29 higher than a year ago. In all likelihood, gas will stay expensive throughout the spring and summer. Naturally, drivers are looking for creative ways to save.

Gas is one of the most common purchases among Americans, and prices are often top of mind because drivers see them posted at stations everywhere they go.

Whereas inflation for many goods can sometimes sneak up on consumers, a quick rise in gas prices will rarely escape anyone’s notice. That includes politicians, who have been pausing gas taxes and even considering stimulus checks for high gas prices in some states. Everyday drivers are noticing too, of course, and many are taking steps to deal with this new normal.

There are plenty of classic strategies to help you save money on gas, including properly inflating your tires, paying with the best credit card for gas rewards and using apps to find the cheapest gas prices nearby.

You can also save by ditching the car entirely, or just committing to using it less often. Here are some of the ways people are changing their ways in light of high gas prices:

In a recent Morning Consult survey, 44% of respondents said they walked instead of driving last month because of high gas prices. Another 18% said they hopped on a bike as an alternative to driving.

Understandably, interest in electric cars and scooters, as well as battery-powered e-bikes, spiked as gas prices climbed higher and higher.

Searches for “electric cars” on Google rose steadily last year and into 2022, before hitting an all-time high in March when gas prices reached their own record highs. Shoppers searching for electric vehicles on Cars.com rose a whopping 173% from late February to late March, the company said in a press release.

Overall, car sales have been slow in early 2022 because of low inventory tied to ongoing supply chain problems, as well as extremely high prices for new and used vehicles alike. But electric cars have been hot sellers: Tesla sales were up 42% year over year in the first quarter of 2022 in the U.S. and now account for 22% of the luxury vehicle market.

The hunt for e-bikes and e-scooters from brands like Bird is on the rise too, as the Wall Street Journal and others have reported.

While it’s routine for gas prices to fluctuate, mass transit costs experience far fewer hikes. In other words, tickets for buses, trains, subways and light-rail systems are an even more frugal option these days.

Not surprisingly, there are some indications that people are resorting to public transportation more lately. Ridership on the Tri-Rail commuter train in South Florida hit a recent peak at almost exactly the same time that gas prices were hitting their highs in early March, local TV station WPTV reported. Washington, D.C.’s Metro and San Francisco’s BART mass transit systems have also “seen slight increases in ridership since the beginning of March,” according to Marketplace.

In the same Morning Consult survey noted above, 15% of drivers said they used public transport instead of an automobile last month because of gas prices.

Overall, demand for gas in the U.S. has mostly stayed the same as gas prices climbed. The amount of money that drivers have been spending on each visit to the pump has basically stayed the same as well. For drivers, this means that the average gas station fill-up pays for fewer miles on the road.

Citing an analysis from RBC Capital, Bloomberg reported late last month that the average American puts $27.50 worth of gas in their car per gas station visit, regardless of how much gas costs. Naturally, when gas prices are higher, customers wind up driving away with less gas in the tank. As a result, drivers are reportedly visiting gas stations 22% more often while gas prices are over $4 a gallon.

This may seem like a waste of time. But since gas prices have been falling steadily since mid-March, partial fill-ups can save you money — assuming that prices will be cheaper on the day you come back to add more fuel.

During the week of March 7, when the national average reached $4.33 a gallon, U.S. stores saw “the most severe decline in weekly retail foot traffic over the past twelve months that wasn’t directly tied to COVID waves or holiday calendar shifts,” the analytics firm Placer.ai found.

Major grocery chains, like Albertson’s, have noticed customers making fewer trips to the store as well. People aren’t necessarily spending less on groceries, but are likely making fewer food runs and buying more with each trip instead.

Some restaurants and businesses are attracting customers with the promise of free gas.

Bojangles, a fast-food chain with locations primarily in the South, launched a promotion in early April giving away $10 gas gift cards with the purchase of a family meal.

Krispy Kreme is taking an even more novel approach: Every Wednesday through May 4, you can get a dozen donuts for the same price as the national average for a gallon of regular gasoline. (Just over $4 as of this writing.)

Random gas giveaways have been popping up around the country too, with churches, nonprofits, radio stations and local politicians launching short-lived free gas promotions in places like Jacksonville, Philadelphia, Chicago and Houston. Recently, the city of Chicago began sending free gas cards and public transit cards to eligible residents.

According to a March poll from AAA, 59% of drivers said they would change their driving habits if gas costs more than $4 a gallon.

That likely means fewer road trips this summer, according to Fitch Ratings. In a recent note, the credit rating agency said that money collected from toll roads tends to level off with every spike in gas prices.

“High gas prices typically have the greatest effect on leisure traffic, as drivers tend to take fewer or shorter trips,” the agency said.

Free Gas Cards, Tax Holidays and Other Discounts Are Coming to Help You Save at the Pump

Stimulus Checks for High Gas Prices: Yes, It Might Happen